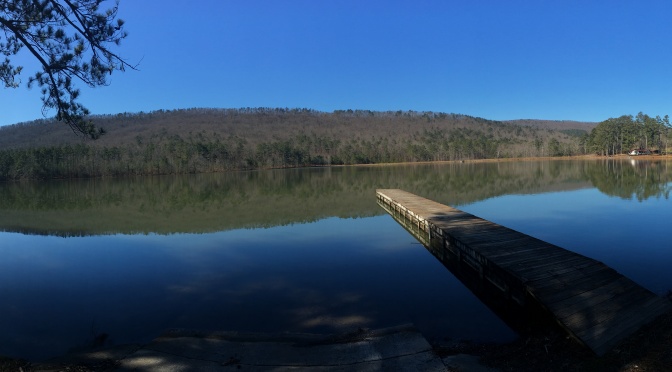 We had been hitting the books hard this past week with school and the guys were ready for some R&R, so when we saw that the weather was going to be a warmer winter day in the 60s, fishing was the order of the day.

My 15YO dove into our Falcon Guide for Fishing Georgia and we settled on his idea of a nice little lake near a Girls Scout Campground called Lake Marvin, just of I-75 near Calhoun, GA.  We didn’t mind driving a ways and a small lake sounded manageable for keeping tabs on the boys while they fished.

First off, if you have an RV, this is NOT a RV-friendly route. As we came within a few miles of the lake, we immediately began to climb a hill with a severe grade and sharp switch backs. Great for a motorcyclist wanting to enjoy a fun ride — not great for a RV trying to just get up and down the hill and around corners. DO NOT attempt this in an RV, I repeat, do not attempt this hill. We were not towing our RV when we took this day trip and I’m glad for it. It would have been a nightmarish repeat of our California experience (which I’ll post about another time). But I digress.

So we arrive at this pristine pretty little lake just down the road from the Girl Scout Camp. It has a boat launch and a dock that squeaks when you walk on it (and it even squeaks from the water movement — lets just say it’s got a very squeaky dock.) Signs about use were posted and it was pretty clear that if you weren’t there to fish, you were considered to be trespassing (I’ll come back to this in a bit). Cost to launch a boat was $2 and each angler was $5. Kids under 12 were free to fish, so we only needed to pay for our two older boys and their launch fee.  (By the way, all funds go to help keep the lake stocked and cared for by the Girl Scouts Organization according to signage — a great group to support so be sure to pay the fee.) There was a primitive restroom just off of the parking lot as well. The location was nice and clean and the garbage can we used had been recently emptied. 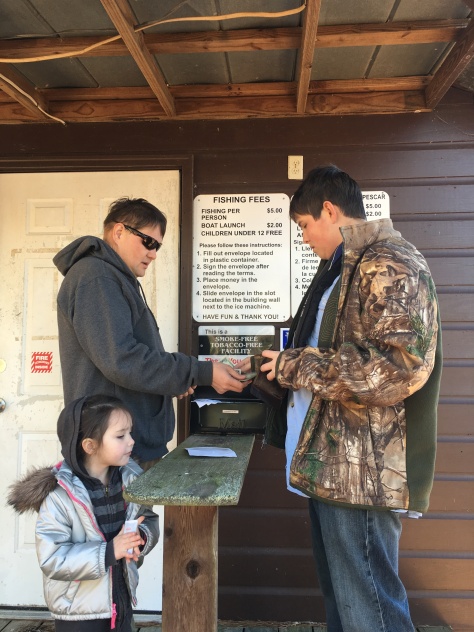 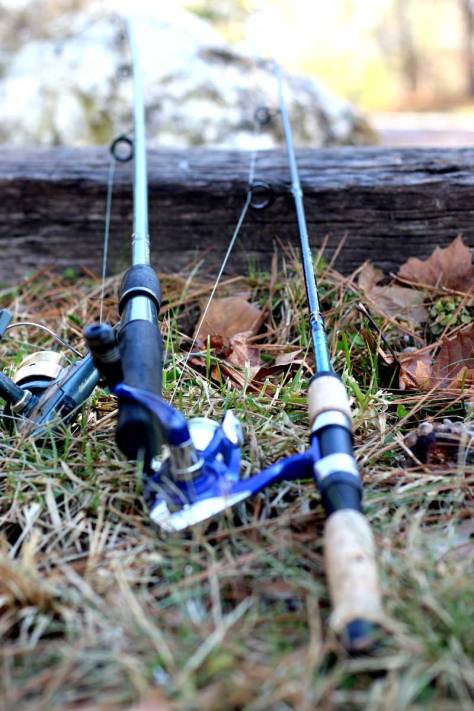 So, we unloaded the kayaks and the boys were on their way in no time. We set up our 6YO on the dock with life vest and fishing pole rigged and ready to cast and our 11YO worked on making some hot chocolate on a little camp stove we brought along. 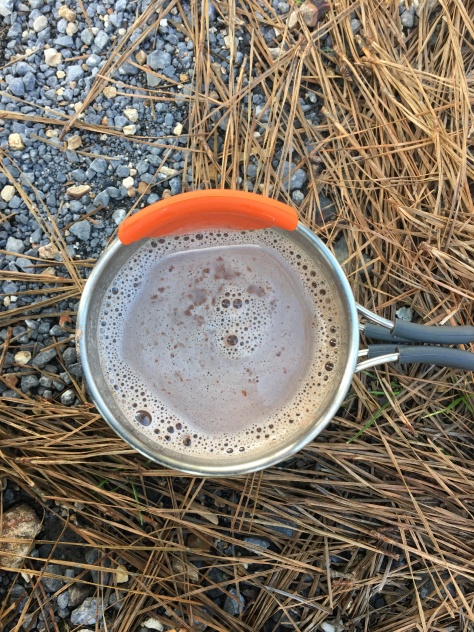 It was a quiet site with only the occasional motorist going by on the road not far from where we were situated.  Our 3YO busied herself with finding pinecones and my husband even set up our son’s hammock and took a bit of a rest. Ahhhh, this is how a Saturday should be spent… simply relaxing. Our 6YO son decided it was more fun to throw pinecones into the lake instead of fish, so an imaginary naval assault broke the quiet calm. 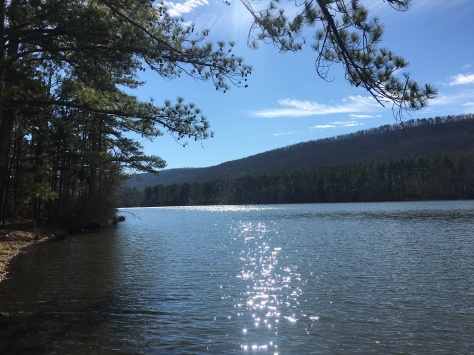 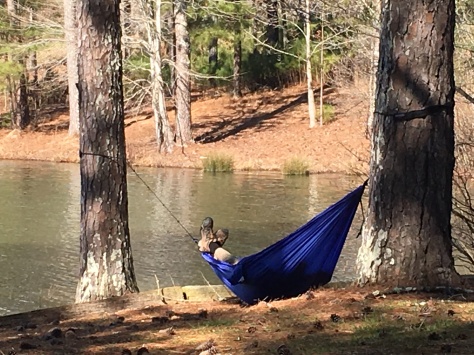 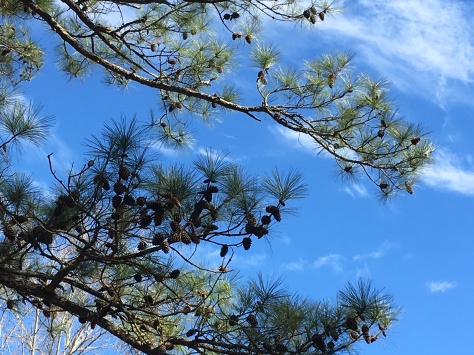 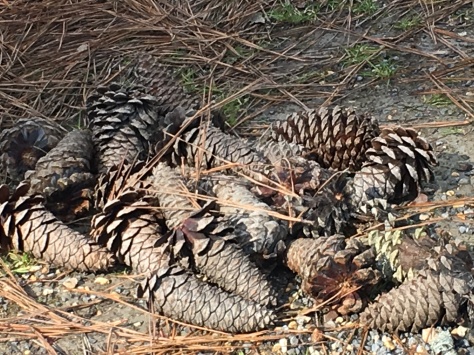 About a couple of hours into our visit, a car pulled into the lot and some teenagers — two boys and a girl — got out and walked off down a little trail along the lake. They seemed to be local. No fishing rods were in hand, so technically, they were breaking the posted rules. Not too long after, they re-emerged and headed off down the road. Then about a half hour later, another car pulled in to the parking lot. This group of three — this time, it was two women and a man — looked a little unsavory and their car looked like it was being lived in with stuff piled in the back seat leaving only room for someone to sit to the side.  What was odd from the get-go was how one grown woman asked the other grown woman to hold her hand on the way to the bathroom. My Mama-safety-senses began to tingle. That is not something most women say, nor do. Even still, we greeted one another and one of the women grabbed a fishing pole and headed to the dock. She hung out for about 10-15 minutes on the dock and then gave up declaring that no fish seemed to be biting.  (And no, she didn’t pay the $5 use fee.) They said good-bye to us and loaded up into their car as if they were going to leave and then oddly, they pulled back over near the bathrooms and turned off the car, then got out and all three went to the restrooms. The two women, oddly enough, went into the same restroom and were in there for about 15 minutes. Folks, I had been in this restroom earlier and it was not roomy. It was basically an open hole with a toilet seat. Noticing their odd behavior, my Mama-safety-senses were in full alert mode and I was put a little at ease when my husband showed me he was packing. There was no wi-fi or phone signal in this location, so if we were robbed or if Lord forbid something worse happened, we needed to be able to defend ourselves. Like a mother hen, I kept my younger three close and ready to throw in the back of the truck if need be while my husband watched the situation. Eventually the women re-emerged from the bathroom, got in their car and drove off (thankfully) down the road.

I know the purpose of this blog is to encourage you to travel and explore, so I don’t want to instill fear, but I want to be open in sharing this experience because the reality is unfortunately that we live in a world where there are some folks that break the law and aren’t safe. I was glad my husband was prepared to defend us if needed and doubly-glad that we didn’t need to take action to defend our family. Trust your gut in these situations. It’s better to err on the side of over-safe than not safe-enough in my opinion. It was a great opportunity to talk with the kids after-the-fact about maybe putting some better boundaries for our family in place when we go to a location. We need to be able to communicate to get help if need be so cell service is a must, we need to definitely keep within eye sight of one another, and we need to be prepared to defend ourselves if needed.

This is not a location we ever intend to ever go back to — not because the boys didn’t catch anything that day — but it just doesn’t have enough visibility nor is it monitored enough to keep those who aren’t using the lake for fishing away.  So, as for fishing, the trip was a bust, but we still had some great relaxing moments and were reminded that whenever we are out and about, we need to be watchful and aware of our surroundings.  And if you live near this lake and know history of this area, I hope you feel free to share your experiences in the comments below. I’d like to think this is an isolated experience on our part, but locals would know the situation probably best. Just be safe in your travels while having fun!

WELCOME TO OUR BLOG!

Follow along as we teach our children that learning is a part of everyday life as we explore our world as a family learning about history, science, art, culture and more!

Faithful Bloggers Directory — How To WordPress Basics: Banish The Confusion

exploring our world as a family

Planned & Field-Tested Trips to do with your Family: 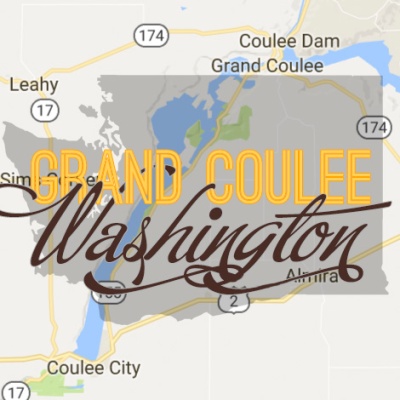